Cargo ships are the world’s worst polluters, so how can they be made to go green?

Shipping produces more carbon emissions than most countries and pollutes the oceans. Will slowing vessels or making them electric do enough?

“You can pretty much get the whole picture of #shipping #GHG situation in one good read from @MarkPiesing ! Great article!”

Check out my very well received double page colour spread and #longread for the award-winning i paper in full below or by clicking here.

There were some great graphics too from the @iNewsGraphics team 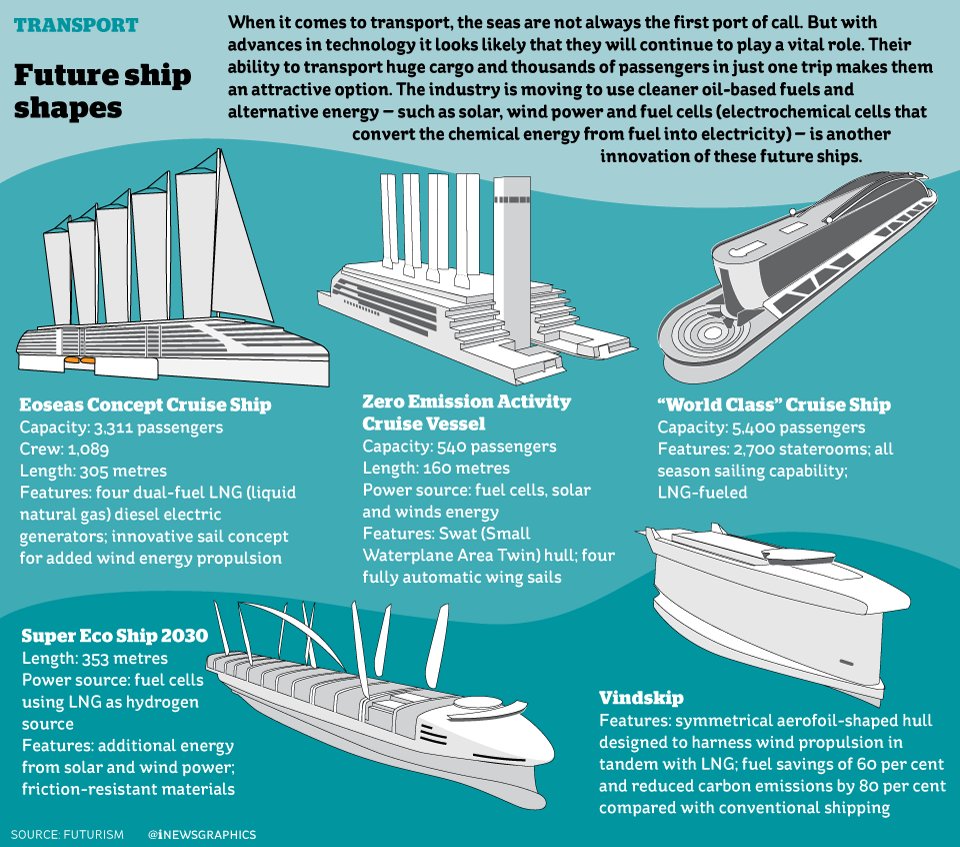 Every day the clothes, tech and toys that fill the shelves in our shopping centres seem to arrive there by magic. In fact, about nine out of 10 items are shipped halfway around the world on board some of the biggest and dirtiest machines on the planet.

It has been estimated that just one of these container ships, the length of around six football pitches, can produce the same amount of pollution as 50 million cars. The emissions from 15 of these mega-ships match those from all the cars in the world. And if the shipping industry were a country, it would be ranked between Germany and Japan as the sixth-largest contributor to global CO2 emissions.

Most of the pollution occurs far out at sea, out of the sight and minds of consumers – and out of the reach of any government. Now, an alliance of environmentalists, researchers and industry organisations, as well as ship owners and builders, fed up with the sluggishness of the industry’s response to its emissions problem, is attempting to do something about it.

Initially, their goals are to ­encourage ships to sail at slower speeds to reduce emissions, to persuade owners to share data with each other to encourage efficiency, and even to help shipping companies find new ways to make money in the low-carbon economy.

Ultimately, they want to do away altogether with the need to burn oil to transport goods overseas. Instead, projects such as the Smart Green Shipping Alliance and the Carbon War Room want ships to be propelled by renewable energy that produces little in the way of CO2 emissions.

The campaigners are in a race against time. They want to persuade the industry to reduce emissions by 50 per cent by 2050. Yet the industry is facing increased demand thanks to population and economic growth that is set to drive emissions from shipping as many as six times higher than they are today.

Whose job is it to clean up shipping?

Like aviation, shipping isn’t covered by the Paris Agreement on climate change because of the international nature of the industry. The Paris deal aims to limit the global temperature rise to below 2°C this century by reducing emissions. Instead, it is the job of the International Maritime Organisation (IMO) to negotiate a reduction in emissions from the industry. Environmentalists blame the organisation for the industry’s slow response.

“International shipping produces nearly one billion tons of CO2 emissions, which is approximately 2 to 3 per cent of total man-made emissions,” says Tristan Smith, a reader in energy and shipping at the UCL Energy Institute and leader of the UCL Energy Shipping Group. “This needs to reduce rapidly if we are to avoid the risks of dangerous climate change – at least halving in magnitude between now and 2050.” “

Reducing emissions from shipping is not an easy thing to do,” agrees Maurice Meehan, director of global shipping operations with the Carbon War Room, an international think-tank working on market-based solutions to climate change, founded by Richard Branson in 2014.

“The industry will say that they are doing a good job building more efficient vessels and retrofitting older ships. However, efficiency is only up because these ships are carrying more cargo. The biggest ships are emitting more because they are speeding up.

“The industry is aware of the problem,” adds Meehan. “What is concerning us is the speed and ambition of their solutions.”

The worst fuel in the world?

Today, most ships burn bunker fuel. Typically, it’s the dregs left over at the end of the refinery process. It is an environmental nightmare. It is heavy and toxic, doesn’t evaporate, and emits more sulphur than other fuels. It is poisonous to fish and crustaceans and isn’t much good for seabirds – or for humans living near ports.

Many analysts believe that the only way that the industry is going to be weaned off its dirty habit is by the introduction of tough new regulations by the IMO. However, that may be some way off.

In the latest round of IMO talks in October, on reducing carbon emissions by 2100, a group of ­European nations and their allies pushed for drastic cuts by 2050, while Saudi Arabia, India, Brazil and the International Chamber of Shipping suggested a slower rate of reduction.

The pressure group InfluenceMap recently caused controversy when it accused the shipping lobbying groups of “having unmatched power” over IMO decisions.

“The shipping industry understandably is reluctant to make large investments until regulations that could make the alternative technologies economically viable are on the horizon,” says Smith.

“And there are groups in the shipping industry taking more conservative and less evidence-based positions in the negotiations on reducing emissions than those being taken by many of the countries involved.

“There are also many in the shipping industry who see the inevitability of decarbonisation and are already working on solutions, and they are going to be in a better position when the transition starts.”

“There won’t be any change without regulation,” agrees Dr Jenifer Baxter, head of energy and the environment at the Institution of Mechanical Engineers. “This due to the simple reason that money talks. Companies fear being driven out of the market if they change their behaviour and others don’t.

“I wouldn’t say that the IMO has been captured by the industry,” she adds. “The difficulty is in its ‘internationalness’.”

The IMO argues that a lot is being done to tackle these deadly emissions. “People rely on shipping every single day, as the most cost-effective and fuel-efficient way to transport essential raw materials, commodities and consumer goods,” says Natasha Brown, a spokeswoman for the agency.

“It is the IMO’s responsibility to make sure that shipping has a minimal negative impact on the ocean and atmospheric environment.

“In 2019, ships over 5,000 gross tonnage – those which emit 85 per cent of greenhouse gas emissions from shipping – will be required to collect fuel-oil consumption data. This data will provide a firm statistical basis for an objective, transparent and inclusive policy debate and consideration of any further actions needed.”

Brown expects that an initial strategy to deal with greenhouse gas will be adopted next year. “The intention is to update this strategy in 2023 – by this time IMO will have been able to consider three full years of data.”

Hopes for the future

Frustratingly for environmentalists, a good chunk of the reductions needed in emissions from shipping could be achieved simply by the ships slowing down.

“Setting speed limits could make a big impact – 12 per cent – by 2030,” says Meehan, “and that could be achieved without the need for new technology or retrofitting. With the technology on the market today we have the potential to take out another 20 to 30 per cent.”

“To achieve a 50 per cent cut we need to get wind turbines and batteries to store the energy they produce, and alternative fuels like hydrogen or ammonia on to these vessels sooner rather than later,” adds Meehan. “We need to convince ship owners that they need to take a risk on early-stage tech.

“Then we need to look at the trading routes the ship sails on and what fuel is most suitable for which route. The availability of any alternative fuels on that route is also an issue. It has to be a case of the right fuel for the right ship.”

Electric-powered ships, for example, could be a good option on short hops, though not so much on longer journeys across an ocean or two – at least not for now.

The Ampere, the world’s first electric car ferry, was launched in Norway earlier this year powered only by batteries. And in China, what has been called the first electric cargo ship is now at work on the Pearl River. It can do about 50 miles on one charge – but, ironically, it is used to transport coal to local power stations.

The Smart Green Shipping Alliance’s plan is to launch a 100 per cent renewable-powered ship in five years’ time. This retrofitted ship would be powered by waste-derived liquid biomethane to power off-the-shelf gas engines and future automated sail technology.

“We are having all these conversations,” says Jenifer Baxter, “but all the data shows we are not doing what we need to do, because CO2 is going in the direction we don’t want it to go in.

“Shipbuilders are not seeing an end to internal combustion engine ships anytime soon. Anything that requires a different fuel or batteries is still a while away.

“Ultimately, nothing is going to change without regulation and that will depend on how much pressure is put on the industry.

“Consumers need to start asking about the shipping policies of the companies whose products they are buying.”

The future of cargo ships

The 400m-long MOL Triumph (below) became the biggest ship to dock in the UK when it arrived in Southampton last May. Its owners claim it is more fuel efficient than previous container vessels. It still burns heavy oil but has been designed to use liquefied natural gas in future if a change becomes economical. The ship can hold the equivalent of 20,170 containers.

The Japanese company Eco Marine Power is designing rigid sails fitted with solar panels for cargo ships, with 80 per cent of the power coming from wind and 20 per cent from the Sun.

The first commercial ship to run on hydrogen was launched in November, producing zero pollution. The Hydroville passenger shuttle is a small craft but there are hopes its technology could eventually be used on cargo ships.