Autonomous vehicles: how safe are trucks without human drivers? 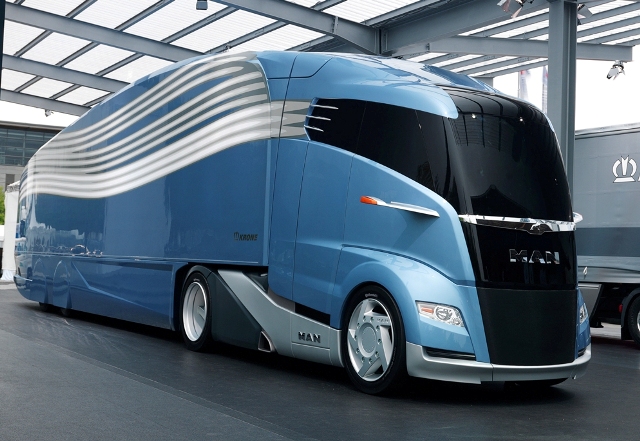 Forget about the Google Car experiments are already under way testing out trucks that can drive themselves. But how safe will these juggernauts be without a human at the helm?

Got a bit behind with my posts… here is my latest piece for The Independent in full below or by following this link. It was the first piece in the UK media to address the issue of autonomous trucks and it was syndicated  to newspapers as far away as Malaysia, Tajikistan…

Hidden away in Australian mines, companies such as Komatsu and Caterpillar have even started to experiment with fully autonomous diggers and dumpsters. Scania is soon to get in on the act as well.

In 2012, Volvo Trucks tried out its autonomous vehicles on public roads for the first time, as part of the European Commission-backed Project Sartre (Safe Road Trains for the Environment), which looked at the feasibility of platooning – when a single, lead driver in a truck, using what might be thought of as a kind of digital towbar, controls the speed, steering and braking of two or more trucks or cars, to form a road train.

Now, the EC has just announced the €5.4m (£4.55m) Project Companion, led by Scania, to develop the technology further and explore the legislative changes necessary for this kind of automated road train to run on motorways such as our own M4. So while talk of Amazon’s delivery drones have caught the headlines, autonomous trucks may be doing precisely that in about 10 years’ time, if the law catches up with the technology.

It may even be that autonomous trucks bring about the kind of surge in economic growth that followed the coming of the railways, with the resulting cut in costs of shifting goods from A to B, and this may well encourage governments to make it happen sooner – even if it won’t make truck drivers too happy.

The European Union is already making advanced emergency braking systems (AEBS) – which can take independent action to avoid accidents, and even, in some cases, prevent them – mandatory for all new trucks and coaches in 2018. So if you find the idea of driverless road trains worrying and a little bit too sci-fi (or if you are a truck driver), you might want to stop reading now.

“Yes, we have done it,” says Carl Johan Almquist, the traffic and product safety director for Volvo Trucks. “It worked. We have already driven autonomous trucks on public roads in Spain. In 2007, we started our research, and in 2009, Project Sartre began. Perhaps we were even doing this before Google.

“In May 2012, the two trucks and three cars that were involved in Project Sartre took part in a road train that covered 200km [124 miles] in one day in Spain. Although driving at 90km/h [56mph], and only 5m apart, is rather scary.” The success of Project Sartre showed, he believes, that the hardware is already in place for something like platooning, as AEBS “is pretty much standard these days on most trucks”.

The only addition was the wireless communication between each vehicle, “which was not rocket science, either, as wi-fi is something we are all getting used to”.

“It is really exciting,” he says, because when the lead driver brakes, the other vehicles brake “instantly”. By allowing trucks to drive as close as 5m to each other, many more vehicles can be fitted on to the same road, and both congestion and fuel consumption are reduced.

However, the law is currently a problem. Article 8 of the Vienna Convention states that “Every driver shall at all times be able to control his vehicle or to guide his animals”.

But the legal delay, Almquist says, “will give the public time to get used to it. They are probably five or six years behind where the technology is. It will take them some time to understand how fantastic this is. However, road trains like this will only work on motorways. There is a different challenge with delivery trucks. It will take machines more time to do that.”

Like Almquist, Sven-Ake Edstrom, the project head for Scania’s Intelligent Vehicles programme, believes that “the technology is almost there” for autonomous trucks to become a reality. Scania began its own research into autonomous vehicles in 2009.

While Scania is already looking at a pre-development project on autonomous dumpers to work in closed spaces such as mines, pilot projects such as the system for automatic driving in traffic jams, and lane -keeping assistance systems, are creating the foundations for autonomous trucking on public roads.

“The traffic -jam pilot is semi-autonomous,” says Edstrom. “It can drive the truck in a traffic jam up to the speed of 50 km/h without support of the driver, and can reduce fuel consumption by 15 per cent by avoiding any unnecessary braking. Lane-keeping assist keeps you inside the white line and torques the steering wheel in the opposite direction, to alert the driver when they cross over.”

Like Almquist, Edstrom believes that the real breakthrough is vehicle-to-vehicle communication, which will allow trucks to communicate wirelessly with other cars and trucks on the road in order to avoid collisions. It will also enable road trains not to be limited to just three or four trucks, although public opinion may well impose that sort of limitation.

“Then, if you had smart roads, they could tell you information about accidents or slippery roads in front of you, so you could dynamically reduce speed and reduce fuel consumption even further,” he adds.

To Dominique Bonte, vice president and practice director of ABI Research, it would appear that “the manufacturers are getting more and more bullish about how much of the technology for autonomous trucks is already in place.

“However, even if it is clearly a technology that is getting ready, there is a big difference between driver-ready or semi-autonomous trucks, and the fully autonomous, where there is no driver at all.”

It is also important, he believes, to remember that autonomous vehicles are not just a gadget, “as they have enormous social and economic repercussions that we are not aware of. There will be huge resistance from the unions and industrial associations.”

It is a technology that is not without its risks, too: “You have to be pretty sure of your technology, given the risk you take of something going wrong on a 20-ton truck.”

According to David Alexander, senior analyst at Navigant Research, “what the industry is talking about is 10 years for fully autonomous vehicles and five years for semi-autonomous vehicles. There are issues to do with legislation before full autonomy is allowed.

“There is a big difference between consumer and commercial markets for autonomous vehicles. For consumers, it is about cost, availability and appeal. There is even a fair amount of suspicion out there among older drivers as to what it means. For trucks, there is a very strong business case for fleet operators to reduce numbers of drivers. It is not something that drivers are thrilled about. The big gains from autonomous trucks may even encourage governments to make it happen sooner.”

While this is a technology that it is ideal for road trucks doing point-to-point long distances on motorways, Amazon’s recent drone package delivery test shows how, using similar technologies, autonomous trucks could deliver small parcels as well.

Carl Johan Almquist believes “we will in the near future be seeing platooning becoming fairly common, as it will save lives and the environment”. Different countries will use the technology in different ways, Alexander believes. In Australia, their already huge road trains could become even bigger, with several road trains hooked together under wireless control.

Dominique Bonte believes that autonomous trucks may lead to robots and artificial intelligence. “So, one day, it may be one of Google’s humanoid robots stepping out of the driverless truck to deliver the package to your door.”

Autonomous trucks: the pros and cons

* Reduce fuel consumption to save costs and the planet

* Cut back on congestion as trucks can travel closer together, so will take up less road space

* Eliminate the need to build new roads, as you can fit more trucks on to the existing roads

* Reduce the number of accidents, as autonomous trucks can avoid or mitigate them

* Eliminate truck drivers, who are expensive and, through human error, cause accidents

* Overall, decrease the cost of transporting goods from A to B, and so stimulate economic growth

* Safety – the technology need to be 100 per cent reliable

* Job losses, as truck drivers will in the end lose their jobs, though economic growth will also be stimulated