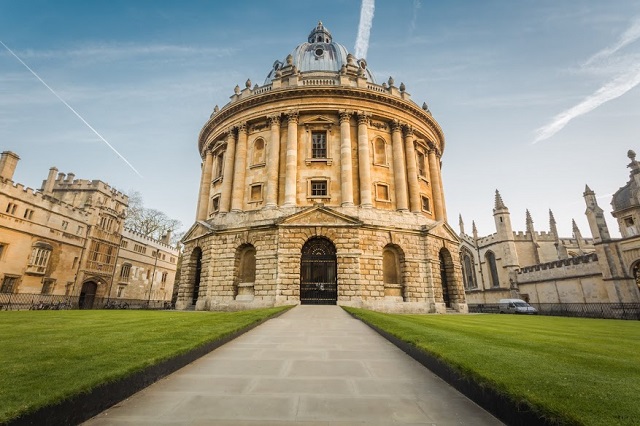 Although I haven’t got round to posting up everything I wrote last year, here is my first new story for 2015.

Read in full below or by clicking on this link my latest hit and exclusive story for Wired including an equally exclusive interview with UK Government cabinet minister Ed Vaizey. It was number two story on Wired.co.uk all weekend.

It’s pitch black outside and everyone should be in the pub, but the HQ of digital agency White October in the grounds of an old music hall in East Oxford is still buzzing as volunteers race to finish the website of Digital Oxford for its launch at the end of January. Some are holding bottles of beer, one volunteer even seems to be having a three-course meal, and there is a dog wandering around who seems to be a vital part of the team. What is for sure is that this website certainly won’t be showcasing any pictures of dreaming spires, Inspector Morse or the Sheldonian Theatre in the snow.

The lack of recognition for Oxford’s digital sector is an old story and Digital Oxford is an ambitious new membership organisation launching later in January that wants finally to put this right and shout out to the world that Oxford is a world-class digital destination. Like similar organisations such as Bristol Media and Birmingham’s Silicon Canals, its more immediate goal is to support the tech, media and creative industries in Oxford and more widely across Oxfordshire.

“Our ultimate goal in setting up Digital Oxford is for Oxford to be recognised by digital support agency Tech City as the number one tech hub in the country,” says Dave Fletcher, award-winning founder of both digital agency White October, which now employs about 40 people, and Digital Oxford. “We have a great ecosystem that has never been recognised on a national level and we need to do some work to make sure it is.”

According to Digital Oxford, digital industries in Oxfordshire employ, at a conservative estimate, about 12,000 people and are worth about £500m a year. And if you want some facts then Oxfordshire has: two world-class universities, nine major business parks, three big annual tech conferences, and 30 digital meet-ups and networking groups. Discussions have even started about turning Oxford into a “smart city”.

“Oxford certainly should be on the same list as other clusters like Bristol, Cambridge and London,” says Fletcher. Yet he admits that there have been some “huge challenges” in setting up an organisation like Digital Oxford. “Our industry in Oxford and Oxfordshire is quite difficult for people to grapple with as it is a bit invisible. While we have large companies that are visible we have lots of small companies which are less visible and huge numbers of freelancers who are invisible but who give the scene its vibrancy. And we need to get the people in the offices out into the scene.

“We are also run by volunteers so are bootstrapped in terms of time and money, but our community has very high expectations. Whether to call it it Oxford or Oxfordshire has also been contentious right from the start, but Oxford is a brand known globally so it would be crazy not to use it.”

Tensions can also run high between Oxford University, which owns much of the land in the congested city, and tech startups desperate for cheap floor space.

“There are lots of great things coming out of both the universities, but the ties could be stronger,” says Fletcher. “We need to build a few more relationships.”

Nevertheless he feels that Digital Oxford has “so far” escaped the politics that Oxford as a city is famous for, as “we don’t want to create an institution or network that can be seen as a rival to others; we just want to create an umbrella organisation”.

“You just need people who really want to create something new, are happy to take risks and have the perseverance to succeed”
Torsten Reil, Cofounder and CEO of NaturalMotion
Tony Hart agrees with Dave Fletcher that Oxford’s digital industries have a visibility problem as “the outside world’s view of Oxford is Oxford University and BMW, and that’s one of the reasons why we are supporting Digital Oxford”. Hart is a commercial business builder for media technology companies and acts as the network coordinator for the Local Enterprise Partnership. “It is an umbrella organisation that represents all our activities.”

“Now, while it is called Digital Oxford it is very important that it acts as Digital Oxfordshire as you can’t see Oxford as a separate entity, it has to be put into context. After all, many of the people who work in Oxford live outside it and there are many digital companies in Witney, Abingdon, Bicester and Banbury that can help build our global reputation.”

With his life spent commuting between California, London and his HQ above the soon-to-close-down BHS in the centre of Oxford, Torsten Reil, cofounder and CEO of motion simulation software company NaturalMotion, might be considered the poster boy of the digital scene in Oxford. And he certainly has an impressive set of vital statistics: NaturalMotion has provided software for such games as Grand Theft Auto IV and Bioshock Infinite; it has released its own games including CSR Racing and Clumsy Ninja; and it was purchased by Zynga in 2014. Reil was also named as one of MIT’s TR-100 global top innovators. And about 120 of NaturalMotion’s worldwide workforce of over 300 are still based in Oxford.

While Dave Fletcher’s White October is an example of a successful Oxford startup from outside its world-famous university, Torsten is a true blue. He was a postgraduate at Oxford when he founded his company. NaturalMotion was then spun out with the help of the university’s tech transfer specialists ISIS Innovation.

“As one of the biggest employers it is very important for us that Digital Oxford succeeds in creating visibility for its ecosystem,” says Reil. “Our support for Digital Oxford is a natural extension of our staff volunteering to help children to code on Saturday mornings.”

Reil does think Digital Oxford faces a big challenge if it’s going to turn Oxford into one of the best digital clusters in the world, however. “In Oxford we have the talent from the universities and now the infrastructure to support it, like the Saïd Business School and Oxford Entrepreneurs, but it has to start with the entrepreneurs themselves. You just need people who really want to create something new, are happy to risks and have the perseverance to succeed. It’s not enough to be competitive locally or even in the UK, they have to be competitive globally and this should affect the decisions they make, even the staff they hire.

According to Gerard Grech, CEO of Tech City UK, “community-based organisations like Digital Oxford play a vital role in the development of a cluster”. They can act as a conduit between all constituents of a digital ecosystem, as well as bringing a community together.

“Oxford has lived in Cambridge’s shadow for too long and it needs to brand itself like Cambridge to attract investment”
Ed Vaizey, Minister of State for Culture and the Digital Economy.

As a cluster, he believes “Oxford has an exciting future. With a critical mass of talent emerging from world-leading universities, it is fast becoming an innovation hub for specialist areas such as cyber security, systems design and integration.”

Omprompt and Solid State Logic are for Grech two examples of thought leaders in this field. Meanwhile, Natural Motion, acquired by Zynga, and Dark Blue Labs and Vision Factory, both acquired by Google’s DeepMind in 2014, demonstrates the potential strength and depth of Oxford’s digital capabilities. It now has Europe’s largest entrepreneurial society with over 10,000 members of Oxford Entrepreneurs student society (including alumni).

“However, access to affordable commercial property can be challenging in pockets and the cluster must be nurtured to reach its potential.”

Speaking about the launch of Digital Oxford, Minister of State for Culture and the Digital Economy Ed Vaizey says: “I first came across these kinds of initiatives three to four years ago with Wired Sussex and I really like them because they are informal, unbureaucratic and they know what people need.

“I am particularly thrilled that Digital Oxford is going to connect Oxford and the county as well as highlight the many Oxfordshire businesses in this space. I am partisan as I am an Oxfordshire MP, but Oxford has lived in Cambridge’s shadow for too long and it needs to brand itself like Cambridge to attract investment and generate more success.”

For Vaizey superfast broadband is the number one priority. “It is the railway of the 21st century. I hear a lot of people complain about the speed of their broadband, even in Tech City, but the UK is now one of the best in terms of access to superfast broadband. The UK has the fastest uptake of 4G, and mobile broadband is vital to connect a county as rural as Oxfordshire.”

While Vaizey “hears the concerns” of the fast-growing digital cluster of Bicester that their broadband is too slow, just like the railways, he says, “it is an engineering project, so you have to first get the fibre to the cabinet. Rollout is actually ahead of schedule, with 90 percent of the UK [aiming to be] connected by end of the 2015.”

He believes that technology is changing the nature of the skills graduates need in the new digital economy, whatever their degree is in. “Graduates with computer science degrees have a high rate of unemployment because we are told their degrees are too theoretical and they are not leaving university with enough practical experience.”

So Vaizey has launched the first degree apprenticeships for the digital sector. Expected to start in September 2015, more than 160 places have been pledged by 15 leading technology employers, including Tata and Accenture.

Linking all of these initiatives together is the concept of smart cities, “and they are not a pipe dream,” he says. The UK Government has awarded £24m to Glasgow to become a future cities demonstrator. There are also a number of pilot projects using open data and driverless cars to address everyday challenges like traffic and congestion. Ultimately, says Vaizey, “smart cities will allow councils to understand the possibility of digital and embed it into their thinking”.

For Dave Fletcher, “the launch of Digital Oxford is just a milestone in the calendar and we are now excited by the challenge of getting things done”.

He and the other volunteers already have their list: “an online jobs board, a physical space in the city, a network of hubs round the county, to bring talent into the city and keep university talent here, reach out to schools…”
Click here for tickets to the launch of Digital Oxford on 28 January, 2015.