Destiny of the Species: Are animals adapting better to climate change than we think?

Parakeets like this one in St James’s Park in London could face being culled (Photo: Dan Kitwood/Getty Images)

There is little doubt that our climate is changing, but what if the effects on the world’s plants and animals won’t be as bad as we think?

Earlier in the summer, I had the chance to pop up to the Vale of York to see the evidence for myself in Prof Chris D.Thomas’s out door laboratory.

Read the results of my visit to Yorkshire in my latest double page spread in the award winning i paper in full below or the original here #longread. It also appeared in The Yorkshire Post here. 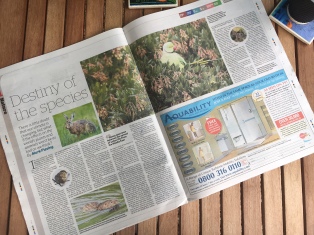 “I’m not bothered about making friends,” says Chris Thomas, as he leans back on the fence at his favourite spot in his outdoor laboratory. “I just want people to think about their assumptions.”

Thomas was the first scientist to estimate how climate change may endanger biodiversity globally. But with a controversial new book, the award-winning ecologist is now leading the argument that nature is in fact adapting to the warmer world we are creating far more than most people think.

It is a good thing the University of York professor doesn’t want to make any friends; during our chat he takes pot shots at Britain’s Countryfile-esque view of nature, the environmental movement and the conservation elite’s hostility to invasive species such as the parakeets that have made their home in the UK – beautiful birds that are likely to be culled.

Later, over a cup of tea in the kitchen of his 19th-century farmhouse, he confesses to me – only half-jokingly – that his nightmare would be hearing that Donald Trump had tweeted praise of his book, Inheritors of the Earth. While this would be great for sales, it would be a bit awkward to be endorsed by a climate change denier – which Thomas certainly isn’t.

I have come to visit the ­pro­fessor in the Vale of York, at his smallholding just outside Selby, to see evidence of this natural ­process. As he gives me a tour, Thomas stops at the point where the trees and bushes he has planted suddenly give way to wheat fields that stretch across the horizon without a hedgerow – or, for that matter, many trees – to break the monotony.

“You bring your average conservationist and stick them in the middle of this, and generally they would regard this as a thoroughly impoverished and damaged landscape,” he says. “In reality, about a third of all British species live in this landscape.

“A high proportion of these species simply wouldn’t even be here if humans hadn’t transformed the environment. Yet we are taught all the time to think of the impact of humans as negative.

“Similarly, we are taught to think of the species brought over by the Romans, like the rabbit or the brown hare, as native species. If it has come over more recently, we are likely to be told to disapprove of it because it will overrun the native species. Most of the time, if a species spreads from another part of the UK, we are told that’s ok.

“Left to themselves, few people disapprove of species like the parakeets making their home in the UK. This hostility is despite the fact that no British species has died out so far due to competition from an introduced species. It may happen, but at the moment we are 1,800 to zero in terms of the species we have gained in the UK.”

As we walk on, Thomas points out ringlet butterflies darting between the wild flowers. Above us, I swear I catch a glimpse of one of the house sparrows that have made a home in one of Thomas’s farm buildings. I nearly fall into a pond full of what I am told is Tasmanian or New Zealand pygmy weed that has found its way here from the other side of the world.

“The house sparrows wouldn’t even be here without us humans. They followed the spread of urban life from the Middle East millennia ago,” he says. “It comes close to being the most successful bird species in the world, yet we think of it as being native here.

“Forty to 50 years ago, there wouldn’t be any records of ringlets in this part of the country, but when the climate started to warm they moved in.

“There is close to universal condemnation of the pygmy weed by the conservation community, yet when I see that a rare marsh orchid grows in it and water voles burrow into it when the drainage ditches dry out in the summer, I can see that there are as many negatives as positives.

“If it was native species doing the same role we would emphasise the positives. If it is a foreign plant then we emphasise the negatives.”

But is evolution itself speeding up thanks to human actions, as Thomas argues? That is a pretty big claim. He bends down and holds between his fingers a rather unremarkable flower. “This is known as yorkwort”, he says.

Its evolution began 300 years ago when the flower that became known as Oxford ragwort was picked from the slopes of Mount Etna by a British collector who took it back to Oxford. It escaped from the Botanic Garden there and spread via the railways. In the 1970s, a new hybrid species came into existence when ragwort interbred with groundsel in the city of York. This was called yorkwort.

Ragwort hadn’t finished. Another new hybrid species has been spotted in Wales and briefly in Edinburgh.

“This process happened around 10,000 times faster than the rate at which new species are expected to form, and human actions are responsible,” Thomas says.

He still believes in conservation, however – but for practical reasons. “Due to the way technology is developing it is very hard for us to conceive what it will be like in 500 years’ time. There may be robots running round doing things that we can’t conceive. It is very likely that the set of species that exist will have changed again.

“But our rare species are our biological toolkit. If a species goes extinct, we are giving away a part of our toolkit without knowing whether it will be very useful. Seed vaults may be an option, but it will be difficult to conceive how a particular piece of frozen material might be useful.

“Given our increasing ability to manipulate genes, we may be able to make things beyond what biologically exists today.” What should we do?

We catch our breath by a couple of nonchalant-looking white horses and I take my chance to ask Thomas the big question that has been bothering me. What does he actually want us to do? “I want us to do nothing,” he says. “I want us to behave like we ­really understand that the natural world is a set of dynamic biological and evolutionary processes, which humans and everything that we do are a part of, and that we need to move with the changes in that system rather than try and maintain it.

“From the biological perspective, over the last 20,000 years the set of species here will have completely replaced itself three or four times – maybe more – and it will go on changing. To keep things as they were during the lifetime of an average human could work in a period of environmental stability, but when the environment is changing as fast as it has been over the last century it is not credible.

“If you keep trying to do this, you will be forever fighting a losing battle – all the indicators are getting worse, because nature will always be moving on from the base line you have drawn. If we take a more positive approach and embrace the changes that are happening, we can start winning.”

‘Inheritors of the Earth: How Nature Is Thriving in an Age of Extinction’ by Chris D Thomas is out now (Penguin, £20) 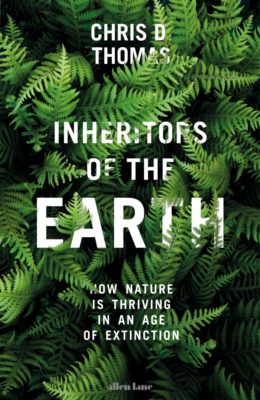