The book the tech titans love 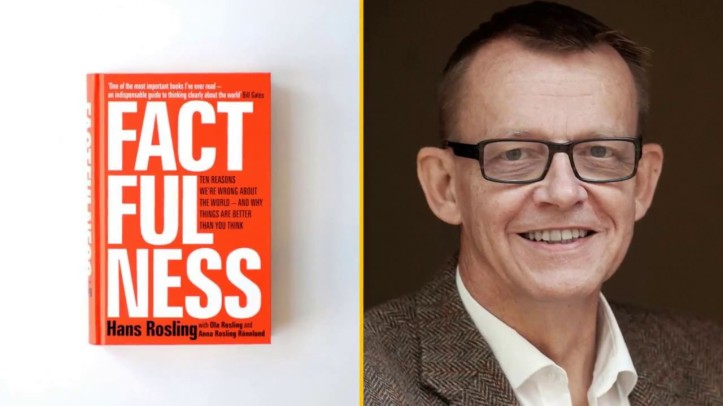 Check out my recent piece for UnHerd.com in full below or the original here.

The book the tech titans love

The Swede liked to shock his audience by taking off his shirt, shouting “Bring me my sword!” and then slowly pushing the sword deep into his throat until only the hilt could be seen. Then he would pull the sword out and throw a challenging one-liner at his audience: “Sword swallowing is a cultural practice that for thousands of years has forced human beings to think beyond the obvious.”

Hans Rosling was a Swedish doctor, statistician, “data rock-star” (thanks to the advent of TED talks) and the author of the bestseller, Factfulness. It is Zen and the Art of Motorcycle Maintenance for 2018. In it, he explores why we get so many facts about the world wrong and what we can do about it – encouraging the reader to think beyond the obvious.

Since its publication in April, the book has acquired must-read status among Silicon Valley executives, thanks in no small part to repeated endorsements by Bill Gates. A friend of Rosling’s, he described it as “one of the most important books that I have ever read and an indispensable guide to thinking clearly about the world”. Gates – as only a billionaire can – then went further than most of us do with our favourite books. He gave a copy of Factfulnessto all new graduates of colleges and universities in the USA, if they registered with his website.

It’s not surprising Gates loved it. Rosling’s counter-intuitive optimism is very Silicon Valley. The book recalled the golden age of the high-tech hub – the era when Larry Page and Sergey Brin, the founders of Google, could make “Don’t be evil” the motto of their company, and Steve Jobs’s Apple could have as its advertising slogan “Think Different” without (too much) widespread mockery.

Like Jobs, the Swede, who died in 2017 (his children finished the book on his behalf) was part missionary and part showman. His mission was to shake us out of the state of ignorance that convinces us the world is getting worse – when, in fact, it is getting better.

Our overdramatic worldview, in his account, misses the big story of human progress. It manufactures a topsy-turvy reality, a “mega misconception”, whereby global poverty is growing, when in fact it is reducing, levels of education are worse rather than better, and violent crime is going up when the opposite is true. “The world has moved on,” Rosling says. “Our worldview hasn’t.”

He enjoyed playing with his audience to prove this. His preferred set-up was to give his audience of medical students, scientists or investment bankers a multiple-choice quiz to test their level of ignorance. Routinely, they would do “worse than chimpanzees” in answering questions designed to demonstrate his somewhat controversial idea that the “gap” between the rich and the developing world no longer existed. By “worse than chimpanzees” he meant that his audience’s results were worse than random, owing – he believed – to ignorance on a global scale how much the world was getting better. Most of the population, he argues, are somewhere in the middle.

Even his audience at the World Economic Forum at Davos demonstrated a level of ignorance that was worse than that of a bunch of apes. Global political and business leaders, it turns out, did not know that the average world life expectancy is 70, that 88% of children are vaccinated against disease, or that in 2100 there will be 2bn children below the age of 15 — the same number as today.

To demonstrate his point, Rosling would use animated graphs. Multicoloured bubbles changed in size as they moved across the screen to show that, for example, life conditions in Sweden at the time of his birth in 1948 had similar levels of health and wealth as Egypt today, or that today the life expectancy and income of people in countries as different as China and Egypt are close.

By the end of his life Rosling had become culturally part of the same world as Silicon Valley. He rejected the “lone genius” stereotype, but was a TED talk phenomenon, had his own army of cultish followers and addressed Davos on sustainable development. He even sold the presentation software that he helped design to Google.

That same limitless optimism and energy bursts from the book. Along with a desire to shock. And each chapter starts with a multiple-choice test. In many ways its technological determinism reads like a therapy-cum-self-help book for hassled Silicon Valley executives who just want to be told that they are doing a good job.

Rosling sets out to make these execs feel better about themselves. He shows how ignorance stops us from seeing the amazing story of human progress, largely created by technology. We can’t appreciate its wonders because of human instincts that have evolved over hundreds of thousands of years. Just as our bodies still want to hoard fat and sugar, we still want gossip and dramatic stories, which, in the past, transmitted information that might make the difference between living and dying. This craving for drama then helps to create an overdramatic worldview.

He maintains we are in a systematic state of ignorance about how much technology is making our lives better because selective reporting prevents positive news stories from making the front page. Instead, journalists, activists and lobbyists produce an unrelenting torrent of “bad news” that mislead us into thinking that the number of people dying from disasters is on the rise when it is on the decline, that there are more hungry people in the world when there are fewer, or in reverse, that there are fewer babies being immunised when there are more.

Negative news, he believes, shapes our worldview because our instincts mean that we pay more attention to scary things. The doom-mongers and manipulators he identifies are, of course, the same journalists and activists who frequently have Big Tech billionaires in their sights.

The problem is that Rosling’s optimism makes him comparably selective when it come to criticism of the tech tycoons and their products. Strangely, the possible hazards of social media and the other products of his billionaire friends are largely unaddressed, despite accusations that the algorithms they have created are amplifying fake news, widening divisions in society and undermining faith in the very facts to which Rosling points. He once said:

“I use normal statistics that are compiled by the World Bank and the United Nations. This is not controversial. These facts are not up for discussion. I am right, and you are wrong.”

Even if you ignore the messianic tone, Rosling may have been selective about the facts himself. Rather like the journalists or activists he disdained, Rosling, according to some critics, put a positive spin on “big picture stats” to back up his argument, while ignoring evidence that suggests that life is still grim for many.

He also glosses over some inconvenient facts: the population in many countries is growing; world hunger is on the rise; and while more girls are being educated, women with advanced degrees still have higher rates of unemployment than men. Almost half of humanity still lives in conditions that the average American, European, or Japanese would find unacceptable.

Rosling argues that the world is becoming more democratic even though many people don’t feel that it is: China’s economic growth has certainly not been matched by democratic reform. He shows us graphs of the numbers of washing machines in the world to demonstrate human progress, but has material progress made us happier? Others read the same graphs as an illustration of unsustainable growth that is destroying the planet. Some might say we were happier as a species when we lived in small, sustainable village communities – or even as simple hunter-gatherers.

Most glaring of all, Factfulness shows no scepticism about the tech billionaires who have helped to create today’s uncertainties – which some might call chaos. Instead, it offers a sop to weary executives who have left it too late to buy a bunker in New Zealand, by assuring them that the apocalypse probably won’t happen. Their ideas and products, he says, are improving everything: technology is bringing our society and species together rather than breaking them apart. And any nagging doubt the techies themselves might feel isn’t their guilty conscience speaking, but down to the media.

Only instinctive, fearful thinking, according to Rosling, would suggest technology is likely to have some negative effects. He studiously ignores any plausible arguments that automation may cause mass unemployment and civil unrest, or that synthetic biology and CRISPR gene editing may create terrifying new artificial life forms and viruses. And he waves aside the idea that AI and body modification may lead to the creation of a new species of uber-humans that will enslave the rest of us.

Rosling could be right, of course, but the jury is still out. What we do know as  fact, however is that terrorism is increasing, more people are dying from war, polar ice caps are melting, and AI is seen by some to pose an even greater danger to the future of humanity than climate change.

At the moment, though, Rosling’s sword metaphor for technology isn’t so much a weapon against falsehoods that seem plausible; it’s more like the sword of Damocles, which hung by a single hair over the throne of Dionysius as a warning of constant peril and foreboding.

If Rosling is right, the “silent miracle of human progress”, as he described it, will continue. If it doesn’t, however, his unbridled optimism looks actively irresponsible. It is not encouraging that earlier this year Google removed “Don’t be evil” from its code of conduct.