Forget the sound of silence

For a long time, we have known of the impact of noise on our health. Now people are starting to demand accountability, writes Mark Piesing

It was great to be back in the i paper last week for the first time since I had finished my book with this double page feature and stunning infographic.

Read the feature in full below or enlarge the original above. It is not yet online.

“At first people don’t tend to want to talk about noise issues, they just think it’s a first world problem, get over it, we have more important things to think about,” says Dr Erica Walker, a researcher at Boston University School of Public Health’s department of environmental health. “And then when you get into the detail of how it is affecting them we establish that, hey, it is a priority – other people stop speaking to you because they think that the solution is going to be expensive.”

Walker is a former artist turned public health researcher, and she cycled round the streets of Boston, Massachusetts, to understand the city’s soundscape. Last month she launched her $410,000 (£322,000) Community Noise Lab, an interdisciplinary research lab that will explore the relationship between community noise and health. The lab uses the latest technology, laboratory-based experiments and community events such as “sound walks” to help local communities to address specific noise problems.

As in every city, each community in Boston has its own problem with noise. For some it’s the huge cooling plants on the top of hospitals, elsewhere it may be aircraft landing, taking off and idling on runways, or open-air concerts. And then there are new buildings, which can change the way noise circulates. Few communities can afford the millions of dollars for the full acoustical assessment needed for evidence – and, Walker says, “the offending parties are banking on that”.

Walker calls her approach “ride-share science”. She is able to “go out and collect data on how sound levels impact on our health – “and at the same time I’m helping these communities address questions they otherwise might not be able to”.

“We have known about the impact of noise on our health for a long time,” she says. “Now many of us are starting to actually demand some sort of accountability and results. It’s really about taking what research has already been done and saying: ‘Let’s do something about it, rather just talking about it’.”

This week it’s the UK’s annual Noise Action Week, co- ordinated by Environmental Protection UK. The week is billed as an opportunity to do something about the growing problem of noise. The European Environment Agency found that the number of people exposed to a 24-hour noise level over 55db increased by 9 per cent in the UK between 2012 and 2017. 55db is the level above which people may start to feel annoyed.

Mary Stevens, the coordinator of Noise Action Week, says: “While the biggest source of complaints to local authorities is neighbour noise, environmental noise gets less attention because people often think there is nothing they can do about it, even though the evidence for its effect on their health is growing.”

There has been a tendency in the past not to take the health effects of noise seriously. Stevens describes noise as the “Cinderella of pollution”, overshadowed as it is by air pollution, with next month’s Clean Air Day eclipsing Noise Action Week, which this year has had its budget cut.

The problem is that noise can kill. There has always been plenty of anecdotal evidence of how noise can cause ill health, for example by contributing to a lack of sleep. Now, at last, the weight of scientific research is confirming what we have all always instinctively known: that noise is bad for our health.

Noise that is constant, such as traffic noise, seems to be more harmful to our health than temporary loud events like a motorbike backfiring. Noise throws our bodies out of balance and can in the short time cause annoyance, stress, and lack of sleep – and in the longer run, problems 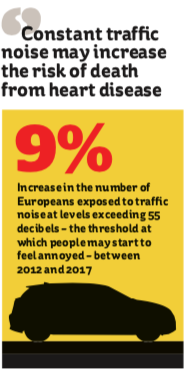 such as anxiety, hypertension, obesity, depression and heart disease. Dame Sally Davies, the Chief Medical Officer for England, has likened the damaging health effects of noise to that of fast food. Last year, researchers at Oxford, Imperial College London and other universities conducted one of the largest studies to date on the impact of road traffic noise on our health.

They used studies that had already taken place in the UK, the Netherlands and Norway to create a sample size of 355,000 individuals. What they found from following the electronic medical records of these individuals was that long-term exposure to 24-hour traffic noise may lead to an increased risk of death from heart disease, independent of air pollution. This was not a freak result. It has been replicated in many other studies across Europe.

“Just like with air pollution, there is no silver bullet to tackle noise pollution,” Dr Cai adds. “I would suggest that people use common sense to abate noise pollution – such as change the bedroom to the quieter side, use soundproof windows, use quieter

Sound levels are measured in decibels. This system of measurement is used because it behaves in a similar way to human hearing walking, use earplugs, and even think about moving home if they are already suffering from a long- term health condition such as hypertension or diabetes.

“We need to better manage road traffic through the introduction of quiet road surfaces and/or low- noise tyres, better management of traffic speed and traffic mix. We should also consider how to reduce traffic noise when land- use or building is planned.”

“It’s expensive to tackle these issues,” says Professor James C Curran, the former chief executive of the Scottish Environment Protection Agency, “but if we do then the interconnected solutions will provide us with happier, healthier, more attractive, and doubtless more prosperous towns and cities.”

The next step for Dr Walker is to update the way sound is measured. She has been to communities where the windows in people’s homes are rattling, but it isn’t classified as a “noise”.

“A lot of people just regulate on how loud the sound is above certain decibels, but sound is very complex. There is a perception component that we don’t even think about. Then there’s the loudness, the frequency, so we’re going to create a new metric that better explains the environmental soundscape.”

She adds: “I’m not one of those researchers who shows up, asks a million questions and then retreats into the ivory tower, never to be heard from again. I want conversations and solutions.”