How airships could return to our crowded skies

Airships lost out to conventional aircraft after a series of disastrous crashes. But now safer technology could be the key to their return.

Zeppelins fill the skies of Philip Pullman’s epic trilogy of fantasy novels, His Dark Materials. The giant airships of his parallel universe carry the mail, transport soldiers into battle and explorers to the Arctic. What was once my local post office in Oxford is in Pullman’s fantasy – a zeppelin station where I could catch the evening airship to London.

When I put the books down the reality is rather disappointing. A handful of smaller airships can be found flying proudly across the United States on promotional tours for brands like Goodyear and Carnival Cruise Line. Last year, a blimp demeaned itself by setting two world records, including one for the fastest text on a touch screen mobile phone while water skiing behind a blimp. A few more are employed to fly well-heeled tourists on sight-seeing trips over the German countryside. Another can be found flying over the Amazon. And that’s about it.

The good news is that soon, the real world may finally drift closer to Pullman’s fantasy. In four to five years, all being well, one of the first production models of the enormous Airlander airship dubbed “the flying bum” will be the first airship to fly to the North Pole since 1928. The men and women on board the Airlander are tourists on an $80,000 (£62,165) luxury experience rather than explorers. Tickets are on sale today.

The Airlander won’t be alone in the skies either. About the same time, a vast new airship the shape of a blue whale, at 150m the length of an A380 and as high as a 12-storey building should rise up above its assembly plant, out of the heat and humidity of Jingmen, China. Its job: heavy lifting in some of the toughest places on Earth. The manufacturers have some Boeing-sized ambitions for this new age of the airship. They expect there to be about 150 of these airships floating around the world within 10 years.

In the history books, the crash of the Hindenburg in 1937 marked the end of the brief, glorious era of the airship – except it didn’t. The US Navy continued to use blimps for anti-submarine warfare during World War Two. The American Blimp Corporation manufactured airships for advertising. New, bigger, hi-tech airships were built by Zeppelin in Germany. Engineers and pilots have spent whole careers in an industry that wasn’t supposed to exist anymore. 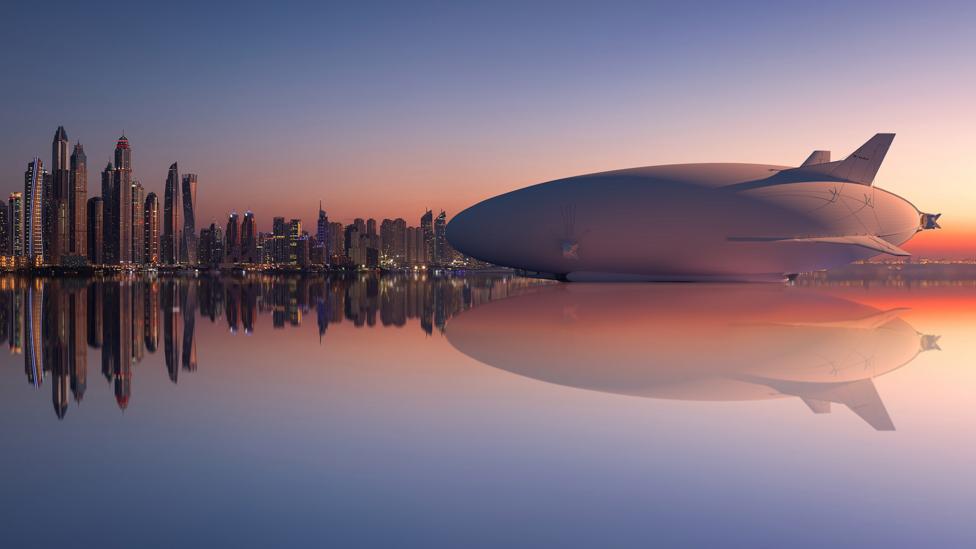 The HAV design doesn’t need a mooring mast and ground crew like traditional models (Credit: HAV)

That said, many lighter-than-air projects failed because they were over-hyped, poorly financed and led by visionaries when they needed a more pragmatic Henry Ford. The fact that the technology was still at an early stage made it easy to overlook. The challenge of building giant airships was underestimated.

Those companies that did manage to sell their airships made them painstakingly by hand. There was a demand for bigger airships, but the manufacturers struggled to pay for the development costs. Today’s airship manufacturers are determined to do things differently.

The Airlander is the creation of Hybrid Air Vehicles (HAV), founded in 2007 by British airship pioneer Roger Munk. HAV’s new technology centre is hidden away on a bustling industrial estate on the outskirts of Bedford, an hour north of London, lost in a landscape of massive new warehouses and housing estates.

Inside the cavernous hall of the technology centre is the battered payload module of the prototype Airlander, still full of the banks of electronic equipment from its final test flight. Next to it is a full-size mock-up of a passenger cabin for a flight to the North Pole and I am the first journalist to see it. There are full-height windows along both sides and even behind the cockpit. There is also a glass floor and a large James Bond-style oval leather sofa that seems to float on top of it. This is for the wealthy passengers to sit on while they sip the cocktails made behind the glass-topped bar. 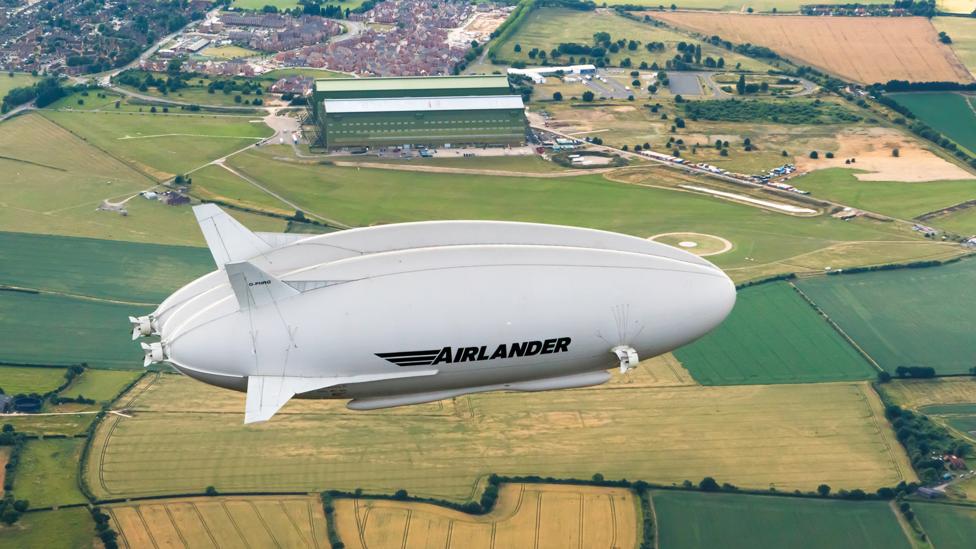 The HAV’s Airlander was first designed for the US military (Credit: HAV)

The Airlander looks very different from the traditional airships in Pullman’s books for a simple reason. Its hybrid design allows the Airlander to fly faster and carry more cargo than rival models. It doesn’t need a large ground crew, a mooring mast and a hangar when it lands.

The airship was initially developed for the US military. When the programme was cancelled in 2013, it was brought back to the UK, rebuilt for civilian use and named Airlander 10. It was finally retired in January 2019 after seven test flights.

The problem for investors and potential customers is that it is still a relatively high-risk and expensive design. The Airlander is the only full-size hybrid airship that has ever flown, compared to the hundreds of regular airships.

“Our flights proved to the outside world that the Airlander is real,” says Nick Allman, chief operating officer of HAV. “Up to then, the risk was that people would look at it and think it’s just a PowerPoint slide.

“Adding helium into the mix with other technologies gives you certain advantages,” he adds. “One of these is endurance. We can keep a very large payload up in the air for a long time [about five days] compared to small drones and critically for not much money. And it’s the running costs that are a huge factor for our customers like the military.” 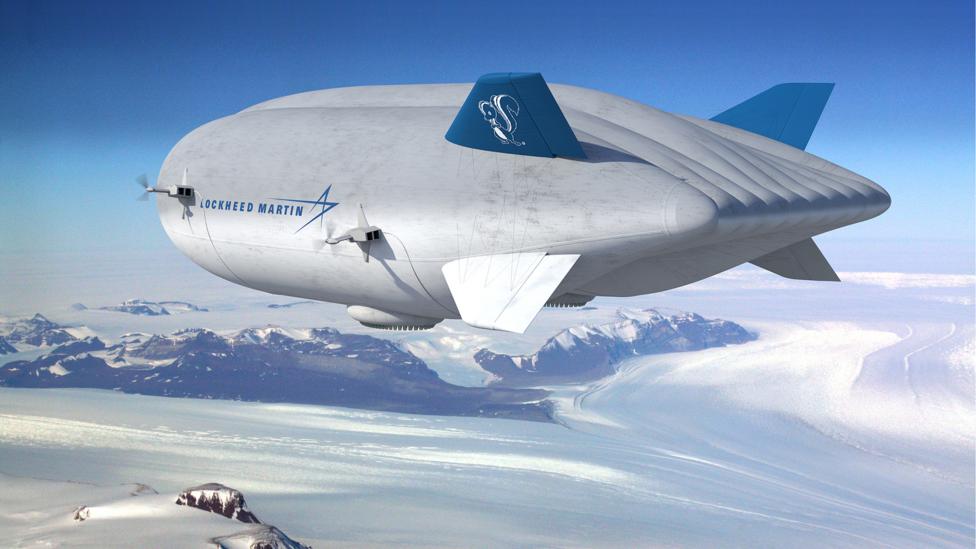 “Other customers are interested in the ‘branded experience’ transferring people from one property to another,” says Rebecca Zeitlin, media and communications manager. “Now, you might do it in a Range Rover, helicopter or plane, but none of those really captures the eco-friendly mindset that these kinds of brands want.

“Commercial passenger transport isn’t dead either,” she says. “We’re definitely talking to people who would like to use the craft to move people in a more traditional way because there is quite a strong flight-shaming movement who think ‘I’d rather take longer, pay more and generate fewer emissions.”

Hybrid airships already produce a fraction of the pollution of a conventional aircraft. Now HAV has been given over £1m ($1.3m) by the UK government and industry to reduce it to zero by developing an electric propulsion system for the massive aircraft.

Despite its vast size, the Airlander 10 is still relatively small. Customers who want to use the Airlander for heavy lifting had better wait for the larger Airlander 50, which has already been designed. Yet it is precisely this market that rivals think is the best opportunity for the airship.

Lockheed Martin’s Skunk Works in Palmdale, California was once famous for the U-2 and SR-71 Blackbird reconnaissance planes. They may soon gain notoriety for something else: airships. The American aerospace giant’s hybrid airship programme is also based there, behind the security fence. 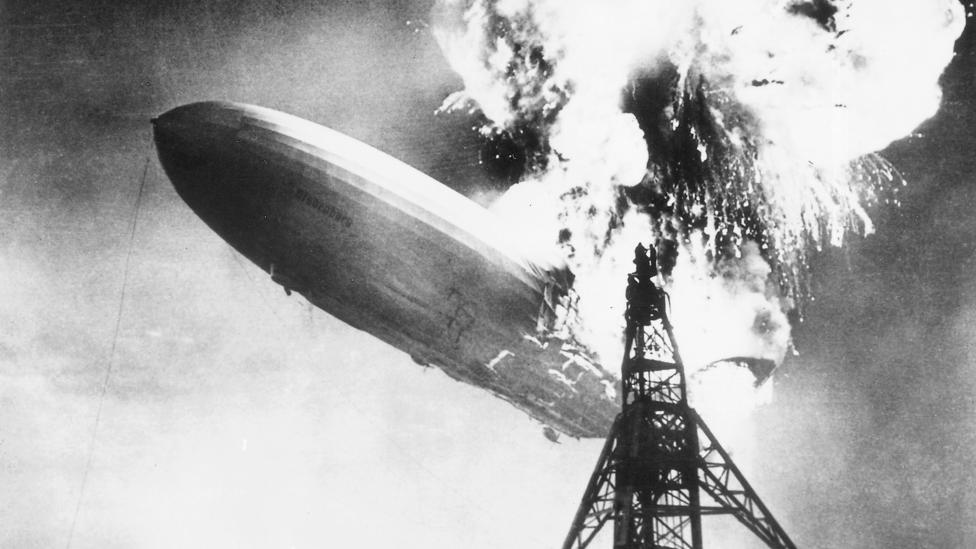 Modern airship designs are much safer than those of the 1930s, when the Hindenberg tragedy occurred (Credit: Getty Images)

Launched at the Paris Air Show in 2015, the LMH-1 is similar in size and shape to the Airlander. Like its British rivals, Lockheed first built a technological demonstrator as proof of concept, but – unlike HAV – they are only now in the early stages of development of the prototype. When Lockheed have secured the double-digit orders for their airship that they want the assembly line will be at a Lockheed Martin factory in Palmdale.

“Demand is created when customers have unmet needs,” says Robert Boyd, Lockheed’s programme manager. “We have identified a need for a safe and sustainable solution that can deliver heavy cargo and personnel to remote communities that have little to no infrastructure.”

“Airships can serve numerous missions ranging from humanitarian relief to natural resource extraction to heavy cargo operations. It’s also possible that once airships break into the market, other uses may be discovered. In this case, the sky is not the limit.”

The airship that is the shape of a blue whale is known by the catchy name of the LCA60T. Despite its slightly unusual design, the airship is actually designed to reduce risk and cost and ensure the project happens. Underneath its hi-tech skin, electric engines and advanced ultracapacitors it is basically a tried-and-tested zeppelin like those in Pullman’s books.

The LCA60T is the product of the well-funded and ambitious Paris-based start-up Flying Whales founded by Sébastien Bougon. Flying Whales has an impressive list of shareholders which includes the governments of France, China and Quebec. Twenty-five per cent of the business is owned by the China Aviation Industry General Aircraft Co Ltd (Caiga) which has a reputation for aggressively pursuing new technologies.

Flying Whales is intent on doing things differently. The start-up has raised £250m ($320m) to manufacture the airship in Bordeaux, France; near Montreal, Canada; and in Jingmen, China. It has partnered with one company to develop the methods needed to mass-produce the ships. With another, it has developed a 30m-high (100ft) automated “air-dock” to minimise the infrastructure the airships need on the ground. It has signed a memorandum of understanding with a leading operator of international airports to build 150 airship bases worldwide, who also agreed to buy a stake in the company.

“We analysed a lot of the older airship projects so that we could learn from them,” says Michèle Renaud, operations manager at Flying Whales. “We wanted to transport 60 tons of payload and have a powerful propulsion system, and to do that you need something strong. There is also a safety question, because it is rigid, so the shape of the airship is given by the structure. And if there is a tear in one of the cells, there is not a great loss of buoyancy. 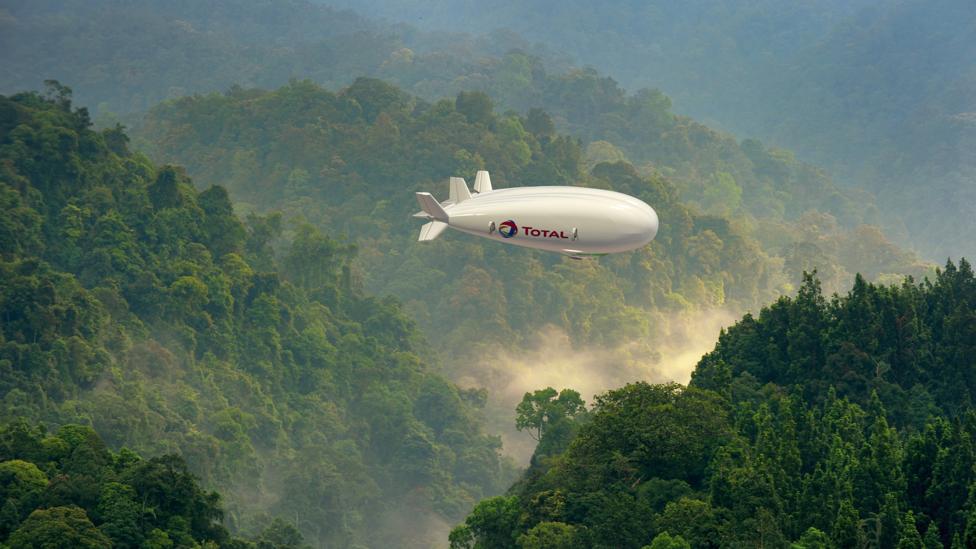 “We will have our own operating company because there are a lot of times where someone will need an airship for – for example – a humanitarian disaster situation but will need additional technical support from people who know how to operate it.”

The ambition of Flying Whales doesn’t stop there. At the end of the year, it is to start the two-year development of its own hybrid airship for French oil company Total. Named the Manta, it will be much smaller than HAV’s and Lockheed’s designs. The job of a planned fleet of 50 aircraft will be to carry supplies and survey equipment too heavy for drones. Currently, there are no plans to build a larger version.

After I visited, HAV announced that two customers had signed letters of intent to buy Airlanders. With production – hopefully – about to start, the company will be renewing its ties to the US military by partnering with an American aerospace company to propose a military Airlander to the Pentagon.

In 2007, a local entrepreneur proposed a commercial airship service that could connect Oxford to Cambridge in an hour

“We are moving away from being a group of people who’ve been involved in airships for a long time,” Allman told me. “We do need to keep that knowledge, but now we need more than that, and we have brought in people with significant aerospace backgrounds.”

There was always an element of truth to Pullman’s alternative Oxford. Now his fantasy could become reality.

There is an old photograph from 1913 of an airship on the ground in University Parks, Oxford, surrounded by curious spectators. In 1930, the enormous British R100 airship hovered over the centre of Oxford and brought the city to a standstill. In 2007, a local entrepreneur proposed a commercial airship service that could connect Oxford to Cambridge in an hour.

The world wasn’t ready for Stewart’s low carbon vision in 2007. Now it just might be. The huge arch of an airship hangar towering over the Dreaming Spires. The evening zeppelin ready to depart for London.